So I made this after seeing “Avengers: Age of Ultron”. I was thinking about the moment towards the end where Ultron starts to say he’s been rethinking and then gets smacked down by Wanda. I thought “Nice call back to Loki”, and then I thought “Nope. You don’t get a funny ‘repentant’ moment. She is pissed. So here it is.

When are comic book artists going to start portraying male superheroes realistically? How are young boys and men supposed to live up to the ridiculous body image ideal presented in comics? Let’s take Captain America – he’s pretty close to a “normal” guy for a superhero – he doesn’t fly, he’s not invulnerable, no eye-beams, etc. Yes, his body and abilities have been “enhanced” by the “super-soldier serum” but it basically just makes him stronger and better than “ordinary” guys. i.e. the super serum let him fulfill the potential of what the human body could be. Fair enough.

“Does this costume make my head look small?”

So let’s look at his costume. Red, white, and blue. Not exactly designed for infiltrating enemy fortresses, but I get it – he’s a symbol. But let’s look closer. He already supposedly has the ideal physique, but that’s not enough for the comic artist. No, his “uniform” (so called because I guess they want to avoid charges of sexism, but can you imagine any man wearing that?) is skintight. But even that’s not enough: he’s wearing (what amounts to) a GIRDLE of red and white vertical stripes (for that slimming effect – gotta have those 6-pack abs!).

His boots and gloves are red (to draw enemies’ attention to the fact that they’re about to get punched or kicked, i guess), but apart from those and the aforementioned girdle the entire rest of his skintight outfit is blue EXCEPT for the star on his chest, and the sleeves. Wait, what? The SLEEVES? Yes, the sleeves, which are actually blue to just about the mid-point of his bicep, at which point they switch to white because…uh… he ran out of blue material? The ONLY reason to cut off the blue sleeve at that point is to accentuate his biceps (which are also drawn ridiculously large).

And that white star? Right in the middle of his manly chest, as if to say, “please notice my awesome pecs!”. The comics make a big deal out of his square-jawed do-rightness and his natural leadership, but his costume says “check out this bod!”

“Even a bad guy shooting at my crotch can’t stop my muscle-y legs from bulging!”

…or doing gymnastics (because it’s important to look graceful when you’re fighting..) 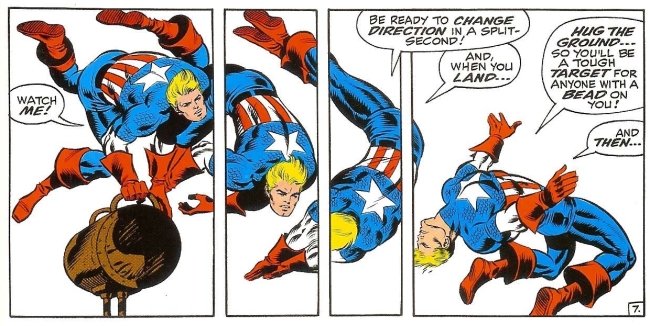 “Observe my sinewy legs and manly chest as I thrust my pelvis up.”

“Tired of my manly chest? Here are my shoulders and back awkwardly presented for you!”

…and you have a pretty unrealistic role model for boys to live up to. Don’t get me wrong, I love reading comic books and I love superheroes, but is it too much to ask that comic book artists depict male superheroes in a way that doesn’t sexualize them?

Not really a blog. I just wrote something I wanted to post and it was too long for Facebook. Probably not even the best thing I’ve written or ever will write or even the most important (if anything I write can be considered important), but you’ve got to start somewhere.  So if this next one goes well, i may post more (Gene Hunt: “oh, lucky us…”)

Also, I’m quite proud of the name and a little surprised no one else had taken it.